skip to main | skip to sidebar

Peterson to labor silently in this fantasy league

Adrian Peterson slid past the first two picks in one of my leagues. He wasn’t even taken in the first round. Or the second. In fact, following our 17-round draft, Peterson remains a free agent. And he’ll stay that way all season. 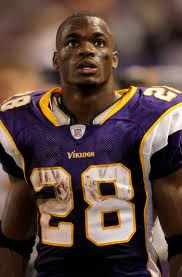 The Flower Mound Fantasy Football League lost one of its original owners a few months ago. Our buddy Phil, my next-door neighbor, was taken from us far too early, and far too tragically. He left a wife and two young sons behind.

We were determined to honor his memory this year; but a simple dedication didn’t seem sufficient.

Phil was a passionate University of Oklahoma alumnus, and his favorite Sooner of them all was Peterson. Phil refused to call him AP, as most fantasy enthusiasts do, because he knew his true nickname is AD: All Day. When he could, Phil drafted AD. Last year, when his second overall pick wasn’t good enough to bag his prize, he christened his team “Missing AD.”

So, in tribute to our fallen friend, Peterson has been idled for the 2010 campaign – perhaps the only fantasy league on the planet with that distinction. AD’s conspicuous absence will serve as a constant reminder of the real void left by our trash-talking, roster-flipping adversary and comrade.

Rest in peace, Phil. We love you, man.

As we steam toward Thursday night’s regular-season kickoff, several high-profile players are looking for work or getting familiar with new playbooks. But few of the recent roster moves will cause more than a blip on the fantasy radar, and the biggest domino of them all (Vincent Jackson) has yet to fall. Here are the developments worth tracking.

In a secret basement near Tempe, AZ, work has begun on a plaster image of Matt Leinart in anticipation of his pending enshrinement into the pantheon of all-time NFL busts. Leinart’s unceremonious departure is unlikely to end the Cardinals’ nightmare, especially since he out-played the new starter, Derek Anderson, throughout the preseason. As we’ve warned all offseason, those banking on Larry Fitzgerald are in for a rude awakening.

Sam Bradford was named the Rams' Week 1 starter, in the least surprising announcement of the week. Now all they need is a legitimate receiving threat. (No offense, Laurent Robinson.) I still anticipate Jackson to land here eventually.

Ahmad Bradshaw has been declared the Giants’ starter, which is not sitting well with Brandon Jacobs. Two weeks ago in my “sleepers” column, I told you Bradshaw would out-perform his backfield mate this season, even if he didn’t supplant Jacobs as the starter. That projection looks even better now.

If you were counting on Michael Bush, I’ll start by asking why. Then I’ll tell you to prepare for a possible extended absence, as he could miss three or four weeks due to his broken thumb. Darren McFadden is the only Raider RB worth a spot on your opening day roster.

Deion Branch and Mike Williams are your starting wideouts in Seattle, now that T.J. Houshmandzadeh has been set free. Suddenly, another USC star-turned-bust has fantasy players across the country a-twitter, despite the fact that Williams has just 51 career receptions since he was drafted in 2005 and he hasn’t played in two years. I have no interest in any wideout currently on the rosters in Buffalo, Cleveland, Oakland, St. Louis, Seattle or Tennessee.

Baltimore’s signing of Houshmandzadeh could hurt Derrick Mason’s production, but not enough to interest me in Seattle’s castoff. There’s a reason the Seahawks released him, and it’s not because they’re stacked at his position.

Perhaps the most intriguing move of the last few days was Dallas’ trade of Patrick Crayton to the Chargers. Once he gets acclimated, Crayton could force his way into the starting rotation, most likely hindering the development of Legedu Naanee.

I’ve taken some heat for placing Jermichael Finley atop my tight end rankings. Some critics even warned that Spencer Havner would poach red-zone targets from Finley. Now that Green Bay has waived Havner, will you trust me now?

Those of us counting on the Jets defense were relieved by the end to Darrelle Revis’ contract holdout. Will Anquan Boldin be lost on Revis Island on Monday night? Let’s just say I like Boldin’s chances better this week than once the shut-down corner shakes off the rust.

As voted by the Fantasy Sports Writers Association

About the Chief Fool

Ladd Biro
Ladd Biro was named 2010 "Football Writer of the Year" by the Fantasy Sports Writers Association -- the most prestigious recognition in the biz. In 2011, he won again -- the only two-time winner in the FSWA's history. He also won for "Best Humor Column of 2011," across all sports. He was a finalist for the FFWOY Award again in 2013, 2014 and 2016, but was denied the threepeat in the voting, which was clearly hacked by the Russians. Ladd's nationally syndicated columns have appeared in more than 20 publications -- including the Dallas Morning News, San Francisco Chronicle, Philadelphia Inquirer, Chicago Sun-Times and Sporting News magazine -- since 2003. Since 2009, all his written fantasy content can be found on the Fantasy Fools blog.

I'll alert you every time I post a new blog entry. And each NFL Sunday I "tweet" who's active and inactive so you can "tweak" your lineups accordingly. Follow me at www.twitter.com/ladd_biro